You bow in silence with a humble grace
Affording us this service you repeat:
To drive away the darkness with your face
While springtime flowers kiss your toeless feet.

Take root
In constant love
That like a forest grows
All while the raging storm above
It blows.

A thing,
Familiar now,
But only so because
I distinctly remember how
It was.

There are
Stupid questions,
And stupid people who
Declare they don’t exist; you know
They do.

These hairy hunchbacks huddle to keep
Warm all together as one;
The mantle they share in perpetual sleep
Is forged from a drop of the sun;
The huddle is broken with one of them woken,
And thusly their end is begun. 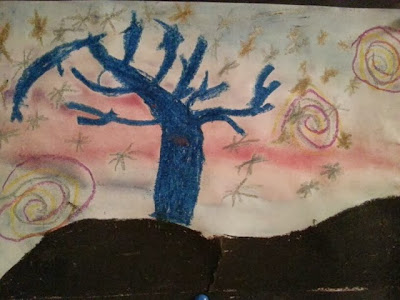 Picture courtesy my niece Zahraa. Thanks JM for what inspired the verse.
O wintery night, how cold is your touch,
My branches remember their leaves,
I miss their green laughter, I miss it so much
Till all of me shivers and grieves.

O wintery night, your stars lend to me
That with them my branches may play
The song of sweet silence, how it will be
The silentest rustle I say.

Do not, oh please don’t turn your back on me,
And trust me with your limbs for just another
Wee step, descend before you heed my plea:
No rungs, just up the one and down the other;
How pure the air of morning time can be.

You cannot forbid my arrival,
And though you may make me depart,
Returning am I when clouds gather high
Eclipsing the sun from your heart;

Or when you are lost in a tempest
Of heedless and dizzying mirth,
I come to remind you as subtly I blind you
To time in its glorious worth.

Although I resent this intruder
I host him without a complaint
And host him despite my complaint,
Lest he may assume me the cruder,
I deck him in apparel quaint

Of silky bright robes, many layers,
And let him remain here with me;
It grieves me, though, when one declares
Him grander than I’ll ever be.

Updated, thanks to some healthy critiquing :-).

Although they never meet in ease,

They always meet in pain,
Remain apart in Iceland, then
Unite in pleasant Spain,
And there, on banks of babbling brooks,
They meet again and again.

Vacant valleys, hidden hills,
Anger shows them near,
Calm you down and clap your hands
To make them disappear.

Badruddin Al-Burtuqaali
Departed for market to buy
His mother a measure of barley.
The light of the evening sky

Did match Badruddin’s little turban
And shalvar to such a degree,
It made Badruddin very happy,
As happy as happy can be.

Now, tucked in the folds of his turban,
Two pieces of copper as price,
And one citrus, juicy and golden,
For serving his mother so nice.

And over his shoulder he slung
A sack of the finest black leather,
While praise of the prophet he sung
In thanks for the summertime weather.

Then when to the market he came,
The shop of the grocer he sought,
And with the two pieces of copper,
A measure of barley he bought.

A barley-filled sack on his back,
Proceeding to whence he had set,
Good Badruddin Al-Burtuqaali
Reached up to his turban to get

The orange, he peeled it with speed,
And broke off a wedge for a bite
When all of a sudden before him
He witnessed a sorrowful sight:

A wretched, old beggar he spied,
Outstretching his wrinkled old palms,
In voice almost cracking who cried
His plea for the smallest of alms.

Good Badruddin felt for the man,
And thought he should give him his snack,
When voices inside him began
To speak to the boy with the sack:

Badruddin, Badruddin, one said,
The orange is yours, if you please,
The beggar will get for his bread
What God the Exalted decrees.

The little boy nodded, It’s true,
And almost devoured a wedge,
Then heard what he already knew
That helped him withdraw from the edge:

Badruddin, Badruddin, It’s true
That God feeds us as He may please,
But know He commands us to do
The kindnesses only He sees.

The little boy nodded, It’s true,
And fell into thought very deep,
Just thinking what he was to do
To, peace, with these two voices keep.

The words of his parents did seem
To help with refining his thought:
When faced with two choices extreme,
The path in the middle be sought.

So Badruddin Al-Burtuqaali
Sat down with the poor old man,
He set down his black sack of barley,
And acted his sweet little plan:

One half of the fruit he retained,
And gave to the beggar the other,
Who joyed for this friendship so gained
In such an unlikely brother.

And as Badruddin ate his share
The beggar looked on with a smile,
And ran his hand over the hair
Of what was a beautiful child.

And when the boy parted his lips,
The beggar would diligently
Collect in his hands all the pips
Which made Badruddin smile with glee;

This went on till done was the half
And twenty-three pips counted true,
Oh, how it made Badruddin laugh
To see what the beggar did do:

He dropped every pip in his hand,
All into the black sack of barley,
And joined in a laughter so grand
With Badruddin Al-Burtuqaali.

Then up little Badruddin got
And started back onto his way
He had not gone far when a thought
Descended and made him to stay.

The beggar had not eaten once
Which played upon Badruddin’s mind,
He turned back but found the man gone
Though left he his portion behind.

Then Badruddin ran home with speed,
Recounted it all to his mother
Who marveled at his noble deed,
Kissed him on one cheek, then the other.

She bid him to offer his prayers,
Then opened the sack he had brought,
And while Badruddin made ablution,
She emptied it into a pot;

And out poured in texture of barley
A measure of gold shining bright
Mixed with little Al-Burtuqaali’s
Three and twenty orange pips, white.

Three riddles today. What can I say !? 🙂

You may find it nowhere,
From you no one may take it,
But, it’s yours once you make it,
And then it’s hard to break it.

My neighbors disdain me, I’m sore;
Yet, when they do come to implore,
Oppose I each neighbor conjointly in labor
To finish up every chore;
I’m stronger than they, I am sure
Kill a whale, Anna Graham.
Kan you guess my name?
Some would think me digital
If I were a dame.

Here’s a shout out to every little Zakariyya that lives in Lombard :-).

Zak Lombardi wants to eat,
So he sits in his usual seat,
Then patiently waits for platters and plates
Each bearing a breakfasty treat.

Zak Lombardi smacks his lips
Bismillah he starts off with sips
Of milk, then a bite of toasty delight
That powders his wet fingertips.

He licks them all clean with a smile,
Alhamdulillah all the while,
He kisses his brother, says thanks to his mother,
Oh, he’s such a beautiful child.

Salaam to greet, then patience,
Bismillah begins all occasions,
Then everything ends with hamd
And a sweet little thank you to mom.