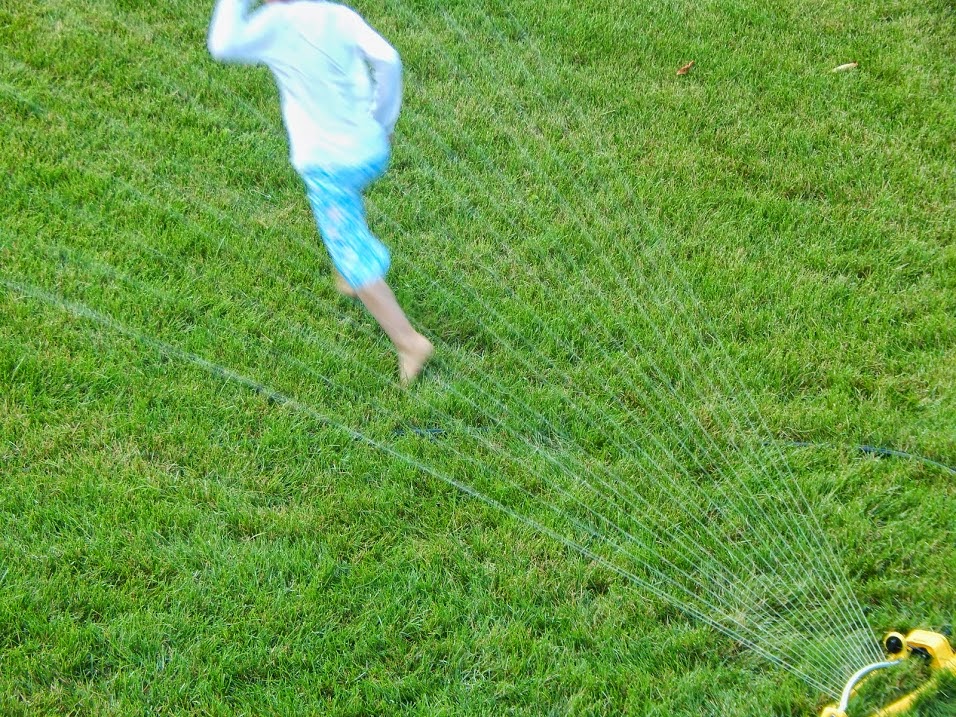 I’m running for cover in the shelter of sky,
When the sprinkler comes on, not a moment is dry,
Playing tag with my sisters and my cousin on the lawn,
Everyone’s getting wet on the sixth of Ramadan:

Getting wet in the kitchen, getting wet on the chair
Getting wet wherever the Quran is in the air,
Mercy rains in the mosque, silent lips sing a song
In the praise of Allah on the sixth of Ramadan.

When a lazy lout who lumbers
Through his daily prayers can
Worship late before he slumbers,
You can tell it’s Ramadan.
When a good-for-naught reciter
Falls in love with the Quran,
Grows significantly quieter,
Yes, oh well, it’s Ramadan.
When a cold pathetic sinner
Struggling with a simple plan
Finds his sins are getting thinner,
Starving hell; it’s Ramadan.
You can skip the lunar sighting
And just look at me, a man
Who can tender this in writing:
I am proof it’s Ramadan.

Looking out over the prairie, just awoken baby in my arms.

Hi there, sky fair,
Cloud is floating by where
Thursday-morning-broken
Bird ascending high there.

Baby and I
‘Tween the grass and blue sky,
Taking in the token
Sights rewarding our eye;

So much passing us by…

#39
It only speaks with lolling tongue

When back and forth by shoulder swung;
But praise for grace a vision brings:
So sweetly the muezzin sings.

#38
When planted, never grows;
It spans a common measure;
Two shape an act of skill that shows
One’s strength despite the pressure.

My sore legs bear witness that I hiked 7.3 miles down the South Kaibab trail of the Grand Canyon, spent the night at Phantom Ranch and hiked 10.1 miles up the Bright Angel Trail the next day.

YES! And I couldn’t have done it without the following, in order of importance:

We met up in Phoenix on the 13th of June and drove to Grand Canyon Village that same afternoon. There, we checked into our room at the very rustic and cozy Maswik Lodge. After a short but restful night, we set out down the South Kaibab at 5:50 AM, about thirty minutes after sunrise. Suffice it to say the South Kaibab is a perilous trail with a steep grade and brutal switchbacks (Wikipedia it for more!). What adds to the excitement is that there is no shade and no potable water the entire 7.3 miles of the trail. So each of us carried 6 liters of water and enough food to last us all the way down.

The views of the canyon are spectacular from this ridge trail. We encountered a pack mule train just past Skeleton Point, and dutifully stepped aside to let it pass. It took us six hours and twenty minutes to get to the Colorado river where we spent a good hour soaking our feet in its cold waters and resting in the shade. I was intrigued that the sands were burning while the waters were icy. We would hear later that day that the Colorado in those parts ran 46 degrees Fahrenheit all year round. I haven’t verified that statement, but I’d certainly recognize the woman that told me that.

Our time at Phantom Ranch was relaxing to say the least, and I slept three hours that afternoon. After an early breakfast at 5 AM the following morning, we set off up the Bright Angel Trail. Despite the steep climb, we covered the five miles to Indian Garden in two and a half hours. After a short rest at the oasis, we continued on for two more miles to the Three Mile Rest House and got there in less than two hours. The Bright Angel offered a different view of the canyon than the less hospitable South Kaibab, with an abundance of greenery, shade and cool flowing streams.

We were only three miles away from the rim, and the thought of being so close filled us with excitement. One of the hikers sharing the shade mentioned how the last 1.5 miles to the rim were considered the most brutal. “Endless switchbacks”, he said. That sounded familiar from a blog post I had read some weeks ago.

We rested our tired feet, and replenished our water supply before continuing our ascent up to the rim, stopping mindfully at the One and a Half Mile Rest House to repeat the rites of refreshment and replenishment. It took us an hour to get there, and our morale was high. But there was no denying the fatigue that was setting in. After an extended break, we decided to brave the last leg of our journey to the rim.

It was slow. We were out of breath every eight minutes or so. I told my companions we’d be in good shape as long as my bad jokes kept coming, and they kept coming for some time. We were particularly troubled when a sixty-six year old hiker and his wife showed up whom we had encountered earlier that morning. They were bound for the river then and now they were passing us on the way up. He attempted to make us feel better by impressing upon us that the Swiss (as he was) were particularly adept hikers. This sharp reminder of our incapacity gave us the adrenaline rush we needed to traverse another one hundred yards before we fell into three distinct piles of meat and bones under another bluff generous with its shade.

We repeated these sprints a few more time and I assured my companions we couldn’t be more than half a mile from the rim when a cheery ranger came jogging down with her hiking poles raised backward and held to her sides. She seemed in a hurry to get to somewhere. I anticipated she was disinclined (ugh!) to stop so I shouted out to her even as she was approaching us, asking how far it was to the rim. She trotted on past us shouting back her response: “One more mile”.

My jokes were getting better, which was bad. And the hiking poles seemed like they needed hiking poles. It had been a little over two hours since we left the last rest house. But we continued on, slowly and steadily. Endless switchbacks.

It took us another hour to get to the rim. The last mile and a half had taken us three gruesome hours. In all, including breaks, we had been on the Bright Angel Trail for nine hours and twenty minutes.

And in all honesty, it was completely worth it. I can only agree with others who say that you haven’t really seen the canyon unless you see it down from the river.

Here are a few more shots selected from the couple hundred we took.

I sat beside a remarkable woman on my flight yesterday. She was a good talker, and so I played my usual part of listener. Pretty soon I found myself on an emotional roller coaster ride. Her story was rife with suffering, yet she ornamented each trial with a smile and a disarming sense of humor. A life-threatening ailment, a high-risk surgery, multiple instances of children lost to illness and death. It was clear that tears had been shed at every single milestone, yet none was spent in the recounting of those sorrowful tales thirty-five thousand feet up in the sky.
That is, not until she mentioned her mother-in-law.

She spoke of an initial lukewarm relationship that had turned sharply cold for an extended period of time. Then, when she was recovering from a difficult surgery, in a dramatic turn of events, their relationship had blossomed into one of sincere caring, love and unwavering friendship. She had grown very close to her mother-in-law. And just as she had found solace from this unlikely quarter, her mother-in-law passed away, quite suddenly.

That was when the dam of smiles broke and the tears seemed like they wouldn’t stop flowing.
This poem is in honor of that woman and of the human spirit that endeavors to stand up a dam of smiles to hold back a rush of tears, that life may go on. Such a dam only breaks in remembrance of one who knows the waters behind it.
But there is always One who knows, whose sweet remembrance moistens hearts with tears.

The Dam of Smiles
I cannot say why I am weeping,

What fills me with sorrow today;
You know I am smiles no matter the wiles
That destiny tosses my way.

I’ve sailed on an ocean of pain,
Lost children I never could see,
And those that I saw and hoped would remain
So swiftly were taken from me.

Now you, how we hated each other,
And just couldn’t see eye to eye,
We’ve been through these storms, one after another;
I know that I’ll never know why

Your feisty old heart did incline
Toward me, for when I was down,
How well had your heart responded to mine:
We haven’t since traded a frown.

I feel better now that the dawn
Is warming my heart once again,
And just as it slips away, you are gone,
Abandoning me with no friend.

Yet here do I sit, through my tears,
I smile that the Lord gave to me
A mountain of hard tribulations and fears,
With rivers of love running free,

Depositing sweet memories
Of all of the times that we shared,
Thank God for my smiles that seem to increase
With every damage repaired.

#36
Around it goes
With its sharp, little nose;
Can opens, but can’t close.

#37
Never travels, stays in bed
Yet compelled to rest ahead.